My Review of Grant Cardone 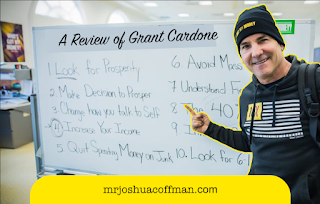 A Review of Grant Cardone
written by Joshua Coffman

Grant Cardone is the unreasonable sales guru you've seen on Instagram. He is sitting barefoot on top of his personal jet. He's also a student of L. Ron Hubbard, the controversial discoverer of Scientology. It's impossible to sum up Grant in one word, he himself even decries labels and other forms of summing up his identity. But if there was one thing that he wants people to know him for, it would be "sales." And that's just how I found him.

--- skip to next section for Grant Cardone review

I found Grant just after my first real job ended. I was fired from a church after 7 years on staff because I wasn't a producer. I guess charities even have quotas they need to fill. But I was inspired to go into sales despite my low functioning role at the church. It was partly due to a close friend I had as well, he had been a car salesman and it seemed easy enough for him to feed his large family through sales. So I applied here in Anchorage at BMW.

Little did I know just how low the bar is for hiring at car dealerships.

But you didn't come here for the story about me, you want to hear about Grant. Grant is a different sort of multi-millionaire. He owns several companies that focus on digital, analog and ephemeral products that improve revenue flow through modern sales skills.

He is also a major multifamily real estate mogul.

But most people just know him because he works hard, and he has for years. Not a day goes by that I don't see posts on social media everywhere, emails, videos, commercials, podcasts, and new products. He is everywhere. And it doesn't stop.

And in an era where most sales gurus post random motivational clips of themselves from weeks or even months ago, his current-cy and relevance just continue to grow.

--- skip to next section to continue Grant Cardone review

I had never had a real interview before. Unfortunately, now I kind of feel like a pro. So I wanted to be prepared for the interview, and of course, being the nerd that I am, where better to prepare than Google itself.

Google seemed to have given me enough to feel satisfied with the level of preparation I was going in for. Every once in a while I would pull up the interviewee questions, just to make sure I felt confident.

Grant has two kids and a beautiful wife. Most of their life is shared on social media. Short Youtube videos give a brief glimpse into their life as Sales rockstars. Personal anecdotes range from their high rise apartment over Miami, to his obsessive blogging in the early morning.

At this point I sound like a doting fanboy.


A Personal Affiliate Link to BitBond.

Piano teaching was definitely my main source of income at the time, but my wife was definitely bringing in some good money at the time as well. In fact, we would probably have focused solely  on building the piano studio at the time, if it weren't for the fact that she was pregnant and getting uncomfortable already: working, stressing and dealing with pregnancy all at the same time.

Forgive me for being an idiot but I literally bought a brand new iPhone that week to "look better" for the interview. The iPhone 4s just wasn't refined enough for a car salesman to carry around. Oh and a new suit from Burlington. It only seemed reasonable to knock the socks off the hiring staff at the BMW dealership.

I've recently purged my social media pages from anything to just mindlessly scroll through, but I still listen to the Cardone podcast once a week on Youtube. He is an inspiration to actually do something with my life, and I hope that I can push him positivity through this blogpost.

But you have to get to know him before you see past his personal jet to understand his perspective on money that you may have been propagandized to reject since birth.

Somehow, the night before my interview, I hit Google again. This time just a general search.

"How to get your dream job"

I think at that point in my life, there were only two jobs that I really thought well of. One was being a pastor. The other was a car salesman. Don't ask me how those two came so close, that's a whole different long story.

But there was a Youtube video that popped up on my search results that featured this scammy looking, kind of greying, but surprisingly energetic guy. And he didn't sound scammy, he got directly to the point with his video, he provided a ton of content, and it was not filled with annoying fluff.

So I started the dangerous click path down Grant Cardone that night and stayed up entirely too late the night before my interview soaking up his content and relishing his audacity to actually give with no thought of return. He was giving me actually good information: no pay-wall, no super long diatribes, no email sign-ups.

From that moment I was hooked.

I highly recommend you buy Grant Cardone's books, become a podcast subscriber, and find at least one other way to plug in to the content that he provides. Either through social media, or if you are actually in the sales industry I recommend you become a member of CaroneU.

I know some people promote Cardone because they get paid to send people to his programs. That is not me. This is just my tribute to the spiritual leadership he has provided for me since I lost my tribe back in 2014.